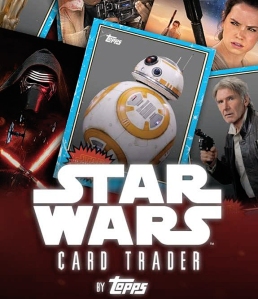 For nearly seven years, I was a heavy player on Topps’ Star Wars: Card Trader (a mobile app offering licensed Star Wars trading cards in digital format). I was one of the early players when the app launched in 2015. I sold off my account in February 2022 with a ranking “in the top 1%” of players worldwide. My “big cards” were several Darth Vader 1/1s and, arguably, the biggest collection of Aurra Sing rare cards in the app.

Why did I walk away from SWCT? For one thing, it was a huge time sink. Honestly, I just got really tired of the daily grind of collecting free credits (one of two in-app currencies), trying to “pull” good cards, obsessing over card counts/rarity and the constant fear that the app could die at any moment (especially after Topps lost the Major League Baseball contract in 2021).

It gets down to the issue of collecting digital goods vs physical goods. Physical stuff, like posters and cardboard trading cards, you can hold in your hands. Digital media is intangible and can disappear at any moment for any reason. Lingering fear of this happening, and tiring of the daily grind of playing, is ultimately why I left SWCT.

I’m still in the digital collecting world, though. I have an account on the Quidd app, which offers Star Trek digital trading cards and other nifty stuff. And somewhere between here and Krypton, I picked up a few Superman and Batman NFTs which are stored in a digital locker somewhere.